My father, Norman Maggs, was born in Ealing in 1921. His father, Ernest 'Ernie' Maggs, was the manager of a Maypole Dairy, a 'pile 'em high and sell 'em cheap' grocery shop that specialized in margarine which the Maypole manufactured itself. On the very day that my father was born, Ernie was opening a new Maypole Dairy in Brentford. There were around 1,000 Maypole Dairy shops in the country in the 1920s; practically one on every high street. The range of goods was limited; margarine, butter and tea formed the vast majority of what was sold. These were among the basic staples of life sold at the lowest prices; the business was very competitive. As was the norm at the time, Norman's mother, Gwendoline, did not go out to work. It was the policy of the Maypole to share the profits with its employees, so while business was good, Ernie received a handsome bonus each year. As a consequence, while it lasted, Ernie and Gwen enjoyed a comfortable standard of living. It didn't last. Ernie was made redundant in 1934, a victim of the Depression in general, and competition from New Zealand butter in particular; after more than 25 years' service, he was given just one week's notice. One of the consequences of this was that Norman was unable to take up a scholarship, and was forced to leave school before he was 14. He spent much of his early life in a series of menial jobs.

Nevertheless, circumstances eventually allowed my father to spend some years in the British Museum Reading Room which he visited most weekdays. The Reading Room housed what was effectively the British Library until 1997 when it moved to its new purpose-built premises in King's Cross. At the 'BM' my father would conduct research on topics that interested him. Going there practically every day, he soon came to recognize other regular readers, and these he christened "BM Creepers..." A regular sport at home while watching television was for him to spot other readers; "He's a BM Creeper!", he'd cry, as one or another exalted personage appeared on the screen.

Norman Maggs' research interests were mostly sociological, and over the years resulted in two books and a number of articles and pamphlets. The books were never published; the first one, a novel based on a factual 19th century case which he researched, was rejected by several publishers; the second book, a charming autobiography describing his childhood in the 'twenties and 'thirties, he never finished.

He did produce a number of articles which were published. I have reproduced a few of them here, with some editing limited mainly to the correction of typos and minor adjustment to punctuation.

The Significance of Stonehenge is the text of a lecture presented to the Architectural Association School of Architectural Students' Union given on 8th March 1968. It is notable in as much as it concentrates not on the 'how' was Stonehenge built, but the much more interesting 'why?' His essay illustrates a level of scholarship astonishing in a person entirely without any formal education after the age of 13. Even though it was written more than fifty years ago and much research and investigation on Stonehenge has taken place since, his essay is still as original and thought-provoking as it was in the late 1960s. I have taken the liberty of pointing out that it was John Aubrey who first suggested the involvement of the Druids with Stonehenge, and also correcting Norman's comment on the rising-sun alignment at the temple at Abu Simbel.

This essay, and some other work started by my father that I am following up, has reignited my own interest in Stonehenge. Consequently, I have taken the further liberty of adding some thoughts of my own as a postscript.

Educating Ealing I: How Lady Byron Did It, is an account of an experimental school started and financed by Lady Byron in the mid-nineteenth century. Norman lived in Ealing, 'The Queen of the Suburbs', for his entire life, so Ealing figures strongly in his world-view. There are fascinating resonances in this piece with education in the 21st century.

Educating Ealing II: Church of England Primary in the 1920s, is, in my opinion, one of my father's best essays. It describes his own education in that seemingly far-off time, bringing the period to life with delicacy and sympathy.

All Because of Crystal Palace, was not published, but is a charming anecdote connecting Crystal Palace and my great-grandfather's roots in the villages of Salisbury Plain close to Stonehenge. Crystal Palace continued its influence on my own life. As a child I would frequently take the Underground from Ealing to South Kensington to spend Sunday afternoons in blissful contemplation of the museums; mainly the Science and Natural History Museums. They were, of course, stimulated and financed out of the profits of the Great Exhibition of 1851. My time spent in the Science Museum gave me a life-long interest in science and technology, and led eventually to a formal education in physics. And of course it was my father who first took me there.

Innocent in Ealing. Norman Maggs' autobiography has succeeded only in causing me to tear chunks of my own hair out in fistfuls. After his death, I tried to identify various parts of it to combine to make a whole. Unfortunately, he had a habit of almost continual rewriting, so there currently exist numerous fragments of approximately six different versions. Needless to say, there is not one single complete text. He changed the title of these memoirs several times, but I have chosen the one that I think best describes the work, Innocent in Ealing. I hope to add, eventually, to the initial chapters. The problem is that he changed the style and approach substantially between the versions, and I am loath to apply my own editorial standards.

His story is fascinating. The fragments that I have, chart his life from carefree boyhood in the 1920s, to his sometimes difficult adventures as a boy-man in the years leading up to WWII (he was very small for his age and left school before he was 14 years old). Amazingly, he was interviewed (and accepted) for a job at St Mary's Hospital by Alexander Fleming, having worked for a while as a laboratory boy in what was to become Imperial College in South Kensington. A love-affair with the camera eventually led him to become a press photographer for the local paper in Ealing. As far as I can see, that is where his tale stops.

One very interesting part of the story is his feelings about the Abdication. It is clear that his view of Edward VIII was that he was more sinned against than sinning, in spite of his American divorcee girl-friend, his visits to Germany and his famous meeting with Hitler.

Obituary of Miss McDonald; this affectionate tribute was published in The Times on 30 October 1980, and I took the opportunity to mention her in my father's own obituary.

Father seemed to find great difficulty in finishing anything that he wrote; partly because he was a perfectionist, but partly, I suspect, because finishing anything was just not his strong suit. And this was a pity, because he could write beautiful clear English, a real pleasure to read. Indeed, he could write in French and German also, and once had a letter, in French, published in a French literary magazine.

His obituary appeared in The Times; a copy is reproduced here. Although it did not appear under my name, around 90% of the text was taken verbatim from copy that I sent to the newspaper. 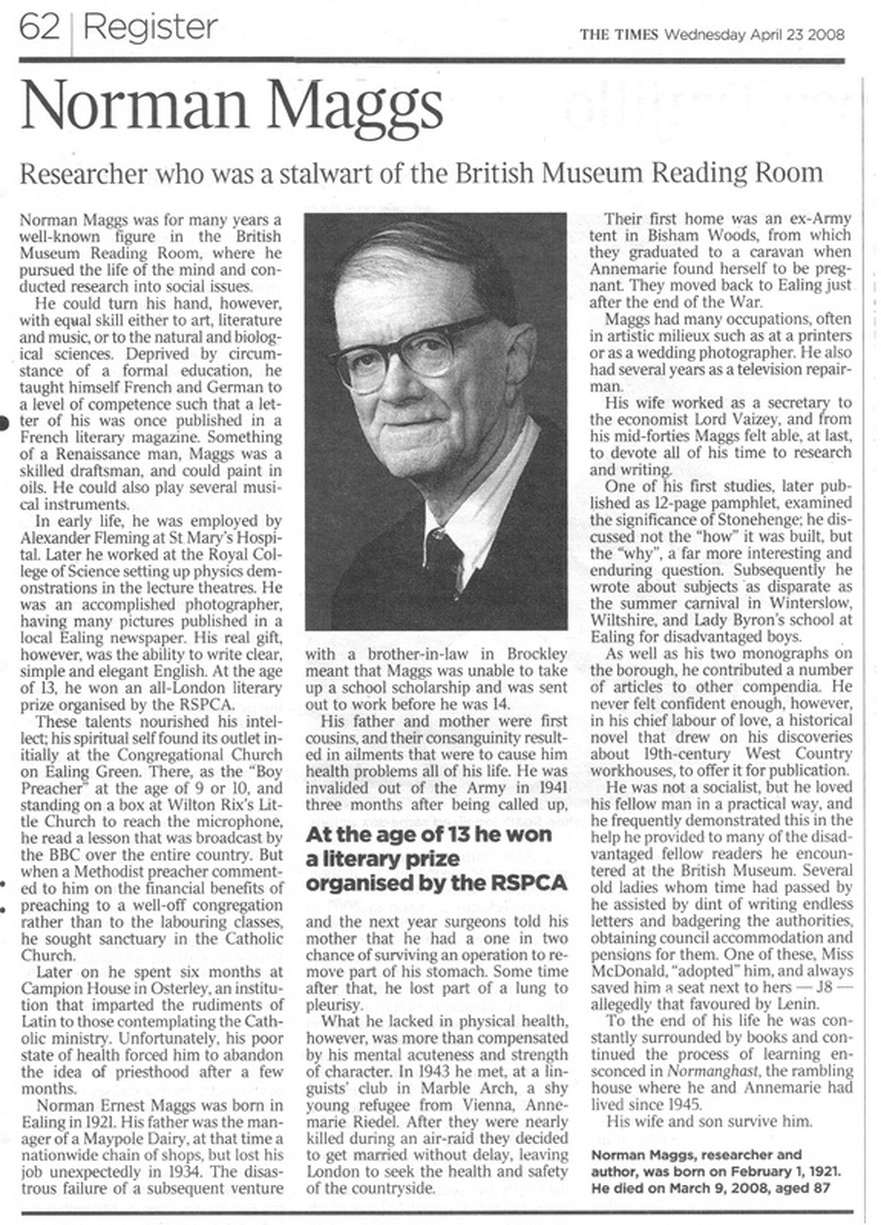