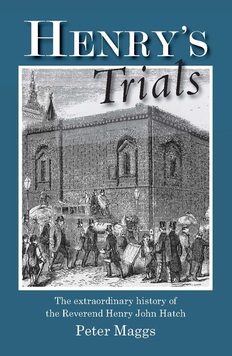 Henry John Hatch, was appointed the first chaplain of Wandsworth Prison in 1851. A well-respected clergyman and active social reformer, Henry was charged, in 1859, with the indecent assault of two female children in his care and sentenced to four years’ hard labour in Newgate Prison. Six months later, his friends brought an action for Wilful and Corrupt Perjury against his principal accuser, one of the children.

The five-day trial of twelve-year-old Mary Eugenia Plummer, which took place at the Old Bailey in May 1860, was a sensation; her mother was drunk in the witness box, her young sister accused Henry of assaulting her while his wife looked on, and her doctor, who called her his ‘little wife’, and examined her following the alleged assaults, fainted during cross-examination. Eugenia's father, Thomas Plummer, admitted in court that his wife had beaten one of her servants, and it emerged later that she had a conviction for assault for the offence...

The book details the long and tortuous path Henry was obliged to take in order to find some justice.