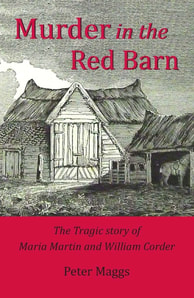 In April 1828 the body of Maria Martin was found under the floor of the Red Barn at Polstead after her stepmother dreamed that she was buried there. Maria had not been seen since the previous spring when she left with her lover, William Corder, ostensibly to get married. Corder was traced to Ealing and arrested, and in August 1828 he was tried and convicted of her murder. Just before his public execution at Bury St Edmunds, he confessed to the crime.

The discovery of the exact location of a body following dreams would be regarded these days with profound suspicion; was Maria’s stepmother, only nine years older than Maria herself, involved in a conspiracy? Three surgeons concluded that Maria had been stabbed in several places, yet Corder in his confession admitted that although he did indeed shoot her and bury the body, he denied vehemently ever having stabbed her.

In this brand new investigation into the Red Barn murder, contemporary accounts and press reports are used to try to answer the question: what really happened in Polstead on that late spring day nearly two hundred years ago?
Crime historian and author Stewart Evans has placed the following review of Murder in the Red Barn on Amazon:

"A Touchstone Book. At last a readable, accurate, and well constructed narration of the facts of this perennial favourite amongst historical murder cases that have grabbed public attention over the years. The author is to be congratulated on his meticulous attention to detail, his comprehensive research and the correction of some historical canards. If there is one book you want on this case, this is it. A touchstone work which should stand the test of time, no other book should be needed on those long past events in deepest rural Suffolk."
Extracts from Murder in the Red Barn